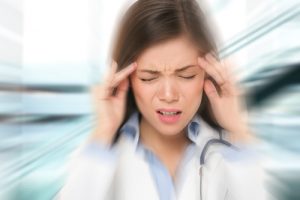 If you have ever had a migraine before then you know that it is much more than a simple headache. The symptoms of a migraine can be debilitating, lasting hours and even days. According to the Migraine Research Foundation, it is the eighth most disabling disease in the world. It is estimated that 38 million people in the United States alone suffer from migraine headaches. That’s around one in every ten people.

According to the Migraine Research Foundation, migraine headaches are extremely difficult to treat and even more difficult to control. This is mainly due to the fact that doctors still don’t know exactly what causes it. This leaves it undiagnosed in many patients and often terribly undertreated in those with a diagnosis.

The best many doctors seem to be able to do is prescribe pain medication that has undesirable side effects in an effort to manage the symptoms. However, chiropractic has been shown in several studies to not only effectively manage the pain of migraines, it also helps stop and prevent them.

Anatomy of a Migraine Headache

There are two types of migraines, those with an aura and those without an aura. An aura can appear up to an hour before the onset of a migraine. It is a warning sign that usually presents as a disturbance that is either visual or olfactory. The person may see flashes of light or smell particular odors before the headache begins. About one in six migraines are preceded by an aura.

Once the migraine itself begins, the pain is typically on one side of the head, although this is not always the case. Other symptoms may include nausea, vomiting, sensitivity to noise, sensitivity to light, and sensitivity to smell. Some patients experience an inability to concentrate, hot or cold flashes, stiffness in neck or shoulders, slurred speech, loss of coordination, and in rare cases, loss of consciousness.

The migraine can last several minutes, hours, or even days. Afterwards the patient may feel fatigued or washed out. They may be unable to concentrate and either lethargic or extremely energetic.

Another study randomly assigned people with migraine headaches several different treatments. One group was given Elavil, a daily medication, another group was given chiropractic treatment and a third group received a combination of the two treatments. The results showed that chiropractic was as effective in reducing migraines as the medication and it had fewer side effects. Other studies have also found that chiropractic is as effective as medication for the treatment and prevention of migraine or tension headaches.

Spinal manipulation is a very effective treatment for migraines.

The patient may be counseled on managing stress, advised to engage in exercise, and given supplements. The treatments may be used to reduce the pain and severity of a migraine once it begins or it can be used to prevent migraines and reduce their frequency.

Chiropractic is a safer treatment with fewer side effects that prescription medications. Chiropractic is quickly becoming the treatment of choice for many migraine sufferers. As the studies show, it works! So if you or a loved one suffer from migraines, give us a call. Your Chiropractor in Friendswood is here to help!